Coming Soon to Your Mobile

Coming Soon to Your Mobile

Invergence Interactive presents SF2K: Class Dismissed. Forget dodgeball, THIS is the meanest game in the schoolyard!

SF2K Class Dismissed is an intrinsically social multiplayer mobile and PC game with a twisted sense of humour. In this game, little girls plot and struggle to rule the schoolyard by teasing, and embarrassing each other.

A fun and sometimes-strange send-up of playground politics, SF2K Class Dismissed lets players loose into a sinister world where your own words might just be the knife that stabs you in the back. Unlike traditional mechanical gameplay, SF2K Class Dismissed capitalizes on the Internet's capacity for communication to deliver a game that revolves around social strategy and manipulation. The 3 to 6 players in a game must chat to survive the harsh landscapes of a schoolyard playground; taunting opponents and making tenuous alliances and bitter rivalries in order keep a shred of their self-esteem points intact. Game actions include grabbing, scratching, teasing, cowering, tattling, and lollipop-licking. When only two girls are left standing with their self-esteem points, they become best friends and win the game together.

SF2K Class Dismissed is an evolution of a popular Macromedia Shockwave game, SiSSYFiGHT 2000, released in, you guessed it, 2000. In addition to a growing crowd of enthusiastic fans, SiSSYFiGHT received accolades from the mainstream press and the game industry. Reviews of SiSSYFiGHT appeared in the New York Times, Details, Seventeen, Time Digital, Newsweek, Wired, Time Out New York, Entertainment Weekly, the Toronto Globe and Mail, Salon, and I.D. Magazine, among others. In 2013, through the generous efforts of the former SiSSYFiGHT developers and Kickstarter backers, the game raised nearly $25,000 for an open-source HTML5 revival. In 2020, during the depths of a COVID-19 lockdown, Invergence Interactive (that's us!) started learning the source code of SiSSYFiGHT. With the ultimate aim of bringing the game to the App Store, Google Play Store and various PC storefronts, we are realising the Kickstarter's goal of ensuring SiSSYFiGHT survives and thrives as the Internet evolves. 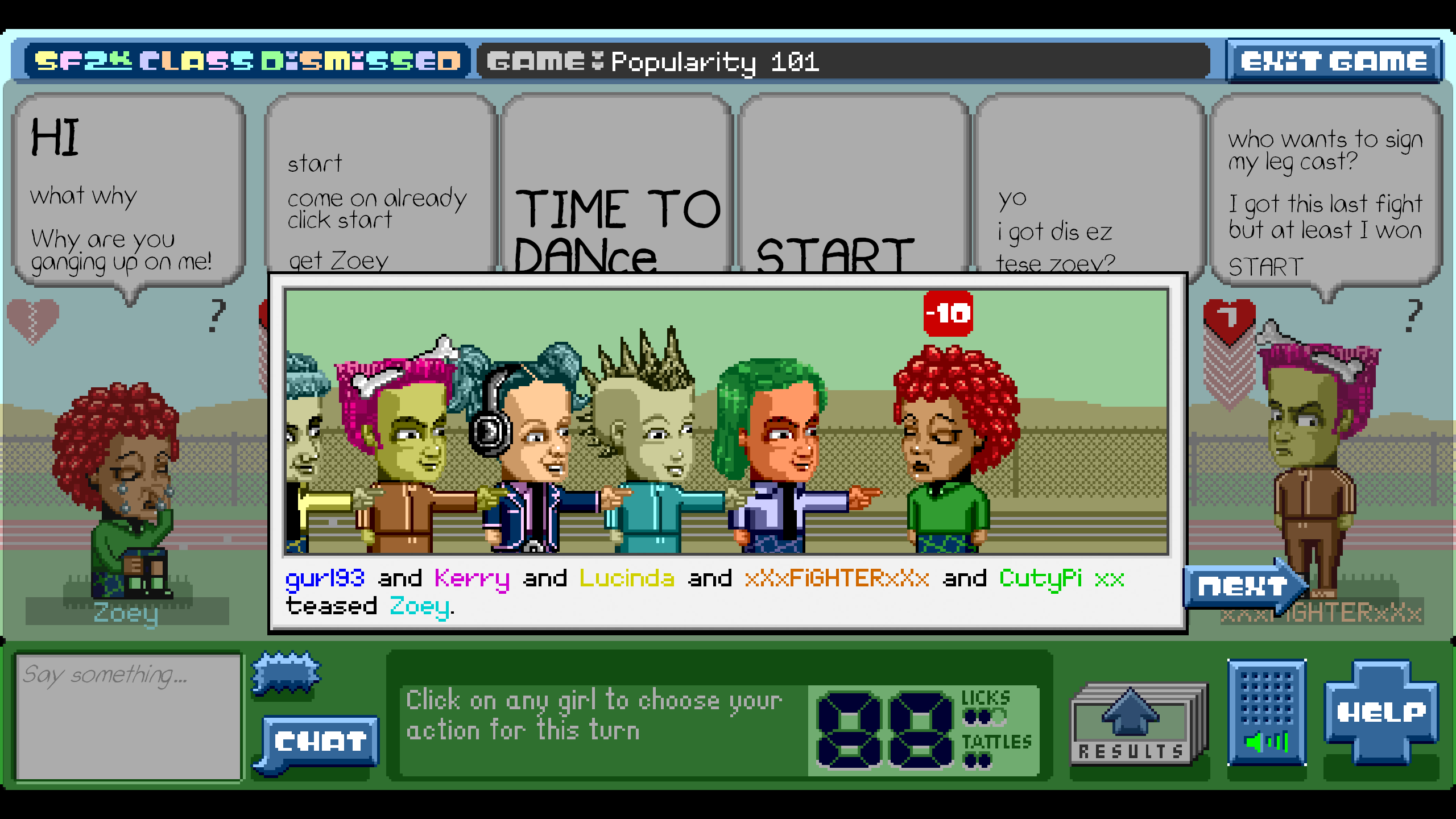 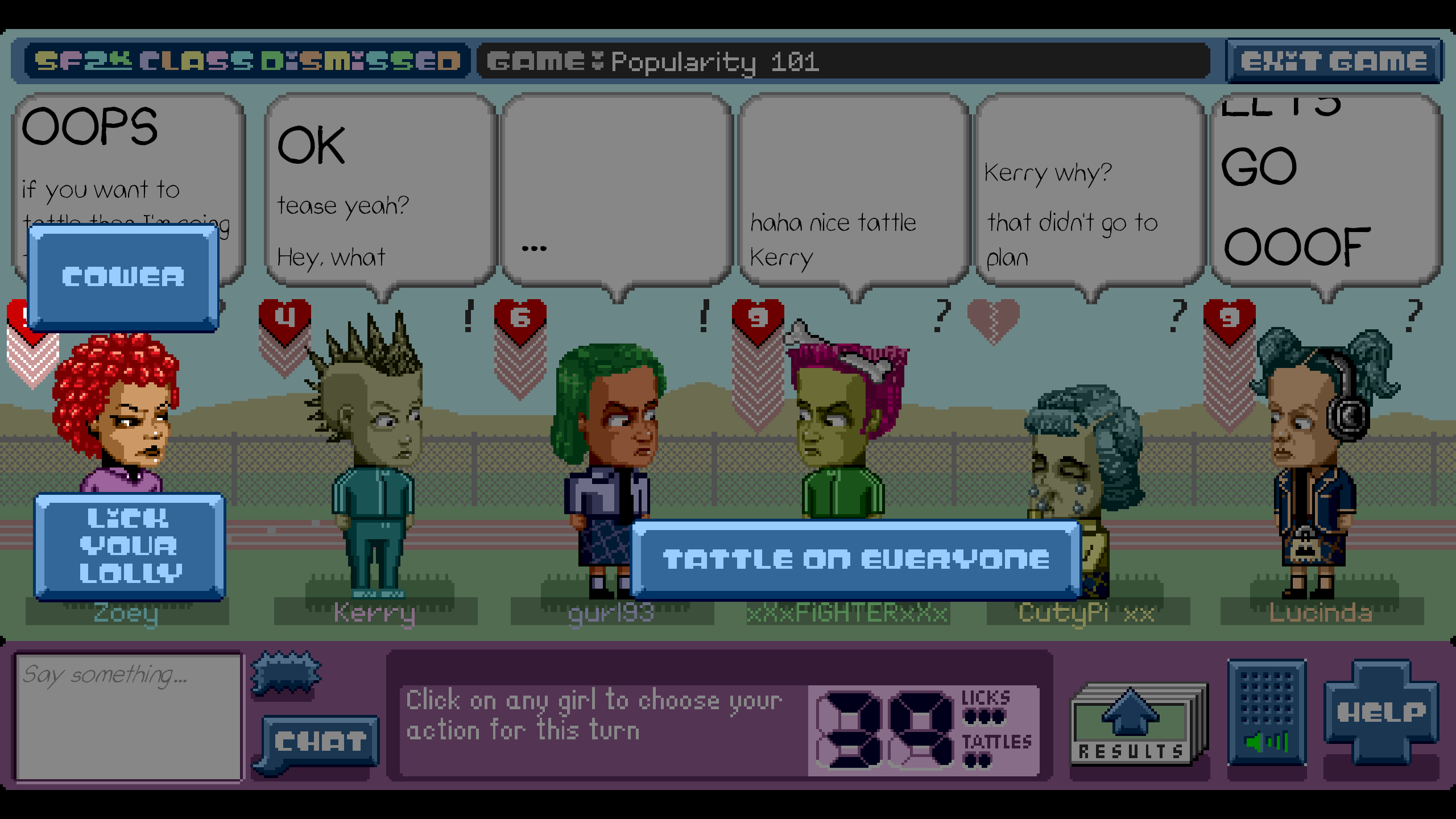 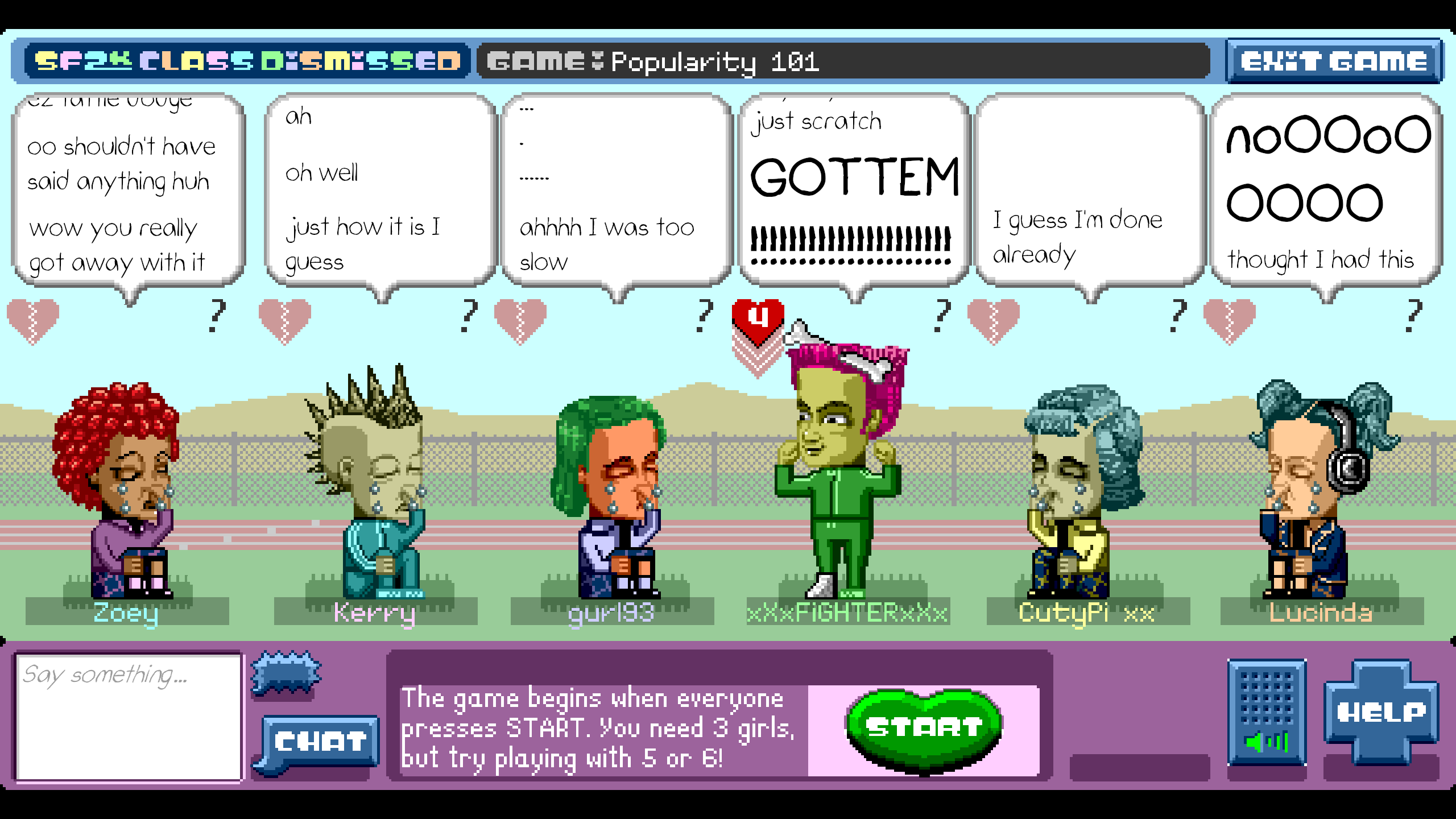 When everyone's self-esteem points are depleted, the last two (or one) girls win the game! Sometimes there's no winner at all... 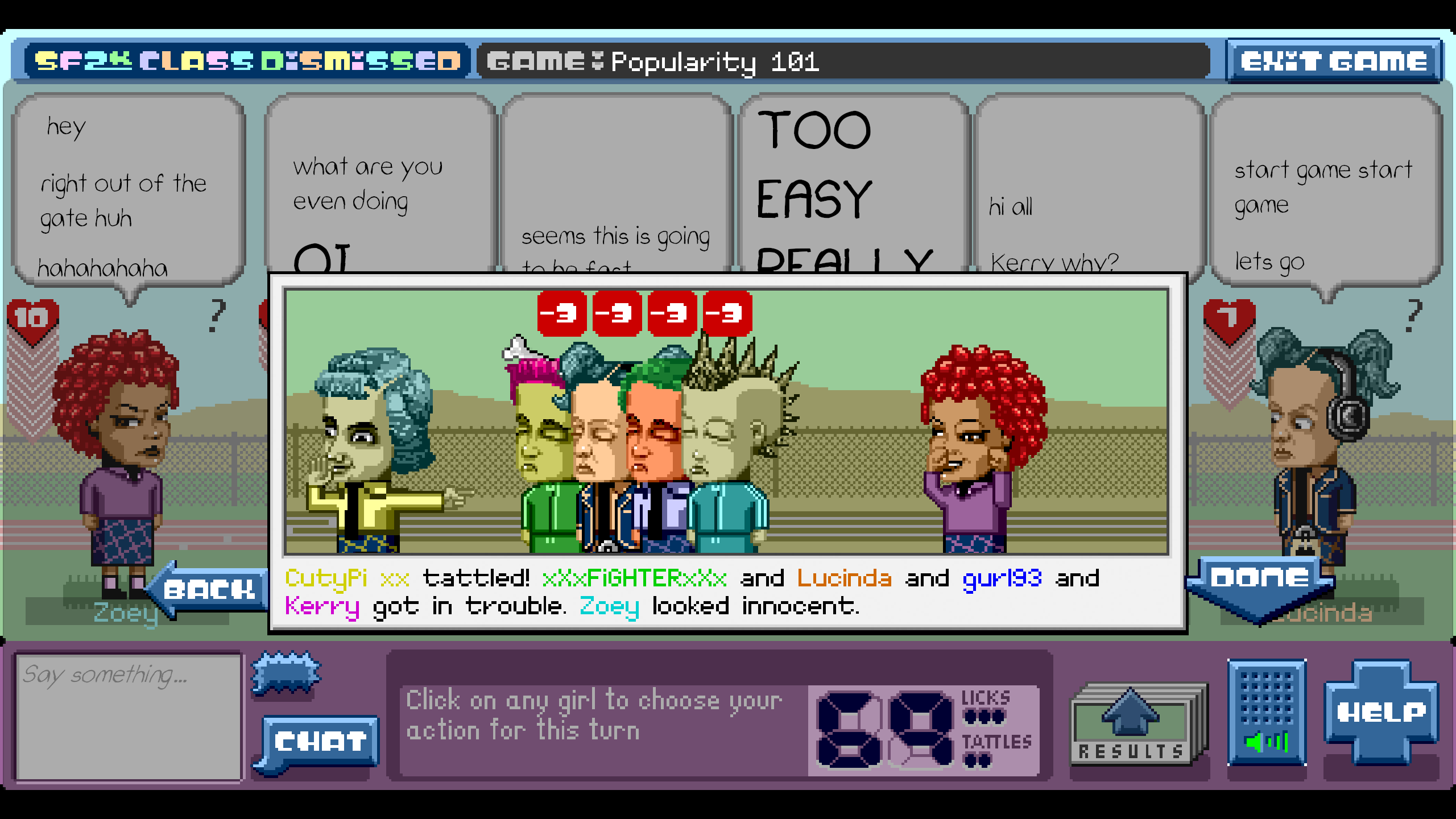 Each move is carefully balanced, with no two games the same! 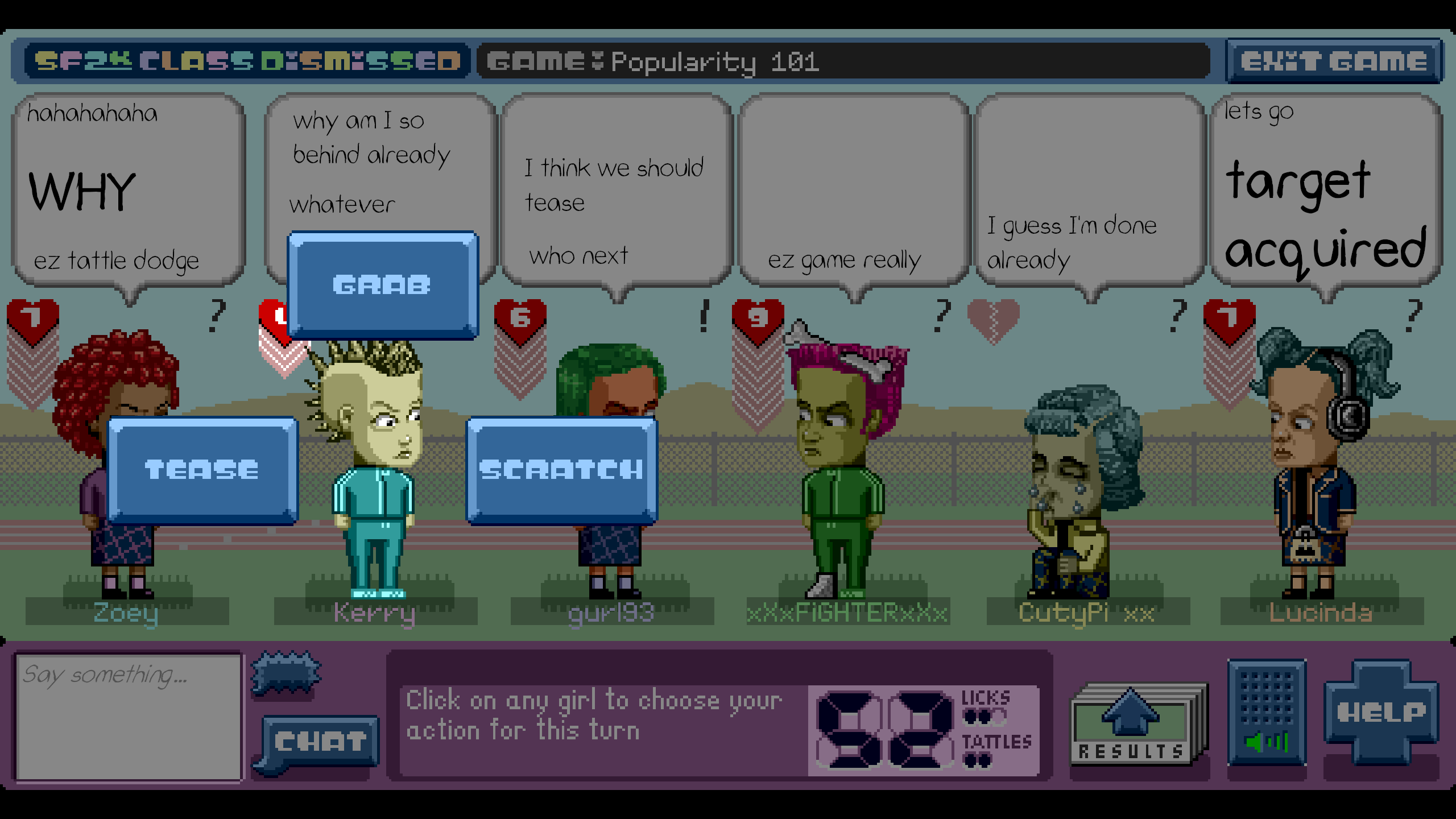 We're the company behind SF2K Class Dismissed! A team of two based in Australia who both have a passion for making games. SF2K Class Dismissed is our first game that's made it to a commercial release but we have previous experience showcasing multiplayer games at multiple festivals in our local indie game scene. We have been working on games, prototypes and generally involved in our local indie game scene since 2013 and Invergence Interactive Pty Ltd has been a fully incorporated company since 2017.